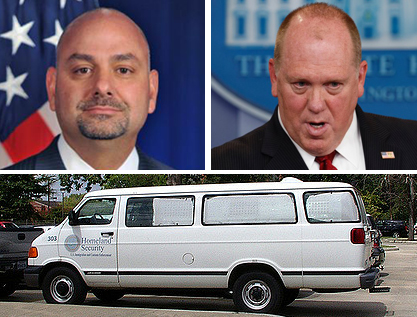 Immigration and Customs Enforcement (ICE) Officers allege that an illegal alien was left shackled inside a van in a parking lot for 37 hours without food or water, and, when found, was severely dehydrated and hungry, had been forced to defecate in the van, and was in serious need of medical attention.

ICE Officers allege that once the horrific situation was discovered, ICE management officials in San Diego and Washington, D.C. took elaborate steps to conceal the incident, to include dropping all immigration charges against the alien, cancelling the alien’s Notice to Appear (NTA) before a Federal Immigration Judge, which had already been issued by the Customs and Border Protection (CBP) Officers who arrested him; and quickly disposing of the alien by dropping him off at a nearby McDonalds parking lot just a few hours later with what officers describe as inadequate medical attention.

ICE Officers also allege that ICE managers purposely misled the alien when they advised him that he could remain in the United States legally following the incident simply by applying for a visa; a visa that ICE Officers claim managers knew full well the alien was not eligible for and would not receive. Officers believe the story concocted by managers was clearly designed to dissuade the alien from reporting the incident and filing charges, as was the act of dropping all charges and releasing him.

While ICE managers dropped all charges against the injured alien, ICE Officers claim the alien’s family members, who were arrested with him on the same day, were placed into immigration proceedings before a Federal Judge, clear proof officers say that no legitimate, lawful reason existed for ICE managers and leadership to release the alien without charges.

Officers claim that there were no visible signs of an investigation following the incident, and there were no policy changes or instructions to ensure that an accident like this, that almost resulted in death, would ever happen again.

“An incident of this severity would almost always be followed by very long, visible investigations that we’re all aware of, not to mention additional training. None of that happened here. It’s like it never happened,” stated one officer who requested anonymity for fear of management retaliation.

Fearful of retaliation and uncertain what to do following the incident, ICE Officers contacted National ICE Council President Chris Crane, who quickly reported the incident directly to ICE’s Director of Enforcement and Removal Operations (ERO), Thomas Homan (now Trump’s nominee for Director of ICE) who responded stating that he wasn’t even aware of the situation, but would be fully briefed the following morning.

If Homan was briefed, it appears that he was either fully aware that charges were dropped against the alien, that the alien was released to the street with inadequate medical attention, and that no significant changes were made in ICE or San Diego policy to prevent a similar incident from happening again – or he was misled by his own managers and provided some other account.

“Homan has turned a blind eye to report after report of problems in San Diego, and because of it, things continue to spiral out of control, like this incident. It seems like Homan is more concerned with covering for incompetent management buddies than fixing problems. We need investigations into the actions of San Diego management and Director Homan.”

Luciano also expressed concerns that as ERO Director Homan didn’t even know about the incident.

“If Director Homan wasn’t even aware of this situation until Chris Crane reported it, what does that say about Homan’s ability to run this agency, or his ability as a Director to control his own managers? Did his own managers conceal facts of the incident from him? If they did, how did he hold them accountable? The American public deserves answers to these questions before the Senate hands him control of a critical law enforcement agency with a multi-billion-dollar annual budget and 20,000 employees.”

While ICE Officers are not familiar with a case like this ever happening at ICE before, a somewhat similar event happened involving the San Diego Drug Enforcement Agency (DEA) which resulted in a lawsuit and award of $4.1 M.

And while some may view the San Diego ICE incident as a difficult incident for management to deal with, ICE Officers say the appropriate actions were clear and ICE managers purposely ignored them. Officers explain that since the alien was in ICE custody and discovered in need of emergency care, an ambulance should have been called immediately and the individual admitted to a hospital. Following release from the hospital, the alien’s custody status could have been reassessed, including release pending his hearing, but there was no need or justification for dropping charges and releasing the alien to the street.

1 Comment on "ICE Leaves Illegal Alien Confined in Parking Lot for 37 Hours without food and water: Alleged Cover-Up Brings Calls for Scrutiny of Trump’s new ICE Director and his involvement"