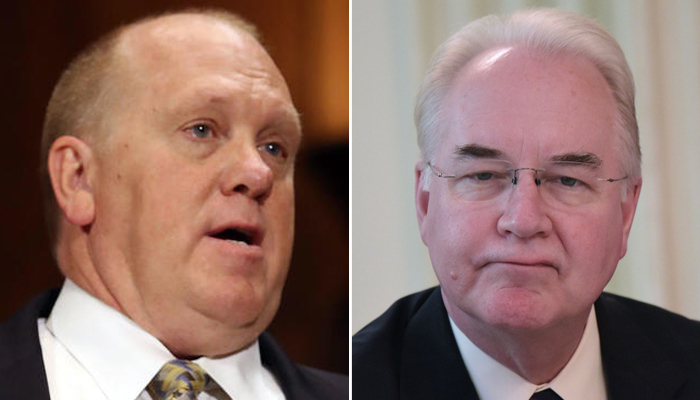 HHS Secretary Tom Price’s $400k for private jets is chump change compared to ICE Director Tom Homan’s millions in free gas and cars for ICE managers, not to mention Homan’s actions hurt his own officers and law enforcement operations in the field.

When struggling American families go to the gas station and cringe at the cost to fill up the minivan or SUV, they have no idea that they are also paying for millions of dollars each year in free fuel and vehicles for supervisors at Immigration and Customs Enforcement (ICE), some of the highest paid employees in the entire federal government. And the fuel isn’t for conducting law enforcement work, or any other type of work for that matter. ICE supervisors simply don’t want to pay for their own gas (or vehicles, tires, oil changes, etc.). They prefer that struggling American families pay for it.

How are they doing it? Hundreds of ICE supervisors take unmarked police vehicles provided by Congress for ICE’s law enforcement operations, and instead of utilizing the vehicles for enforcement, as the America public entrusted them to do, ICE supervisors use the vehicles for their own personal use with no mission need. It’s estimated that each ICE supervisor involved is gouging American taxpayers for approximately $5,000 annually in free fuel alone. The wealthiest of federal employees literally gave themselves a $5,000 raise without the approval Congress, or anyone else, and taxpayers are footing the bill.

Estimates of the fraud, waste and abuse are staggering. With as many as 500 ICE supervisors involved, estimates indicate that taxpayers are being fleeced for up to $27.5M annually through various costs to include vehicle costs, maintenance and fuel. Fuel costs alone are estimated at $2.5M annually. While President Trump’s Health and Human Services Secretary Tom Price angered the President and eventually vacated his cabinet post after spending $400k on private jets, Price spent only a fraction of the millions that ICE’s Acting Director Thomas Homan spends annually on similar travel perks for his managers.

But not only are ICE supervisors taking millions from unsuspecting taxpayers every year for management perks, they’re knowingly hurting their own officers and throwing public safety aside as they rob much needed equipment from their own officers and law enforcement operations in the field. Officers report instances in which not one single vehicle is available for making arrests because all ICE enforcement vehicles in the area have been issued to supervisors for their personal use. If you can imagine a local police department not responding to 911 calls because they gave all their squad cars to supervisors to use as personal vehicles, that’s what’s happening at ICE.

“It’s a punch in the throat to our officers in the field, said Officer Felix Luciano, San Diego Local President. “It’s demoralizing to see our own supervisors steal from the American public and care so little about our officers and law enforcement mission. It’s embarrassing to call these people our bosses.”

And the limited number of vehicles available to field officers are generally the worst in the fleet. When new vehicles arrive at an office, supervisors take the new vehicles and their old used vehicles go as hand-me-downs to officers in the field for making arrests, often leaving officers with vehicles that are literally junk. As hard as it is for officers to admit publicly, the law enforcement mission appears to be the last priority for ICE leadership and supervisors.

But this isn’t a new story. Prior to serving at her current post as Special Assistant to President Donald J. Trump, Julia Hahn worked for Stephen Bannon at Breitbart and reported this story highlighting the millions of dollars in fraud, waste and abuse each year, as well as the negative impact to ICE law enforcement operations in the field, and the person responsible – Acting ICE Director Thomas Homan.

However, ICE Officers also allege that ICE supervisors involved may be fraudulently filing government documents in an attempt to falsely justify their usage of the vehicles for agency records. This has prompted ICE Officers to call for investigations of their own supervisors into allegations of defrauding the government. If the allegations are substantiated, it could result in the termination of hundreds of ICE supervisors who would be unable to carry a gun and badge if found to have fraudulently submitted government documents for the purpose of their own financial benefit. To immediately stop the fraud, waste and abuse and support law enforcement operations in the field, ICE Officers have asked President Trump to direct that ICE law enforcement vehicles be prioritized for the law enforcement mission, and that the President issue a prohibition against agency management officials taking vehicles without a verified, legitimate mission purpose. Updates on this story will be provided as they develop.