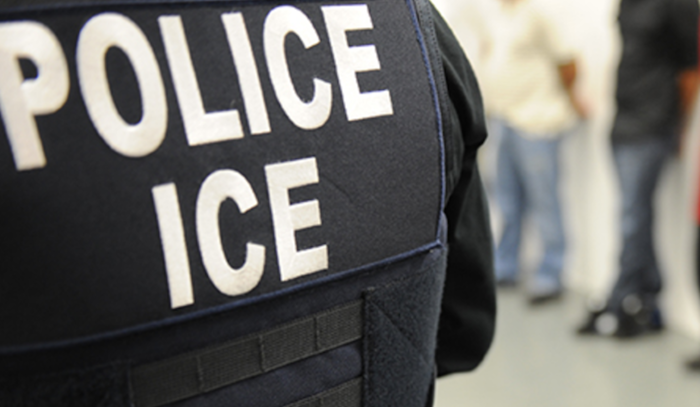 In the early morning hours, surveillance cameras at the Glades County Sheriff’s Office in Moore Haven, Florida captured footage of ICE managers in an undercover vehicle driving slowly in and out of the Sheriff’s Department parking lot searching for a particular make and model of vehicle and license plate number. Within minutes another set of headlights entered the parking lot. ICE managers quickly closed in on the vehicle, exited their car and approached.

It was textbook arrest procedures for criminal apprehension. Only, their target isn’t any criminal, he’s an innocent ICE Officer reporting to the Sheriff’s office where he works each day to prevent criminal aliens from being released into American communities.

Once ICE managers had the ICE Officer cornered in the parking lot, they publicly humiliated him, stripping him in the public parking lot of his gun, badge, law enforcement credentials and all ICE issued equipment – this as deputies from the Sheriff’s office and other staff watched through windows, and members of the public watched from various locations within the parking lot.

When it was all over, the ICE Officer was placed on suspension and publicly branded by his own ICE managers as a sexual predator who had sexually assaulted a female inmate at the jail. A crime which the ICE Officer did not commit.

In the small town, where the young officer and his wife enjoyed participating in local government and community activities, and their kids attend school, it was especially difficult for them to cope with the public stigma of being labeled a sexual predator; a stigma which came solely as the result of the actions of ICE managers who chose to publicly shame their own officer in a small town parking lot, instead of addressing allegations in an office behind closed doors, as any reputable law enforcement agency would do.

But let’s back up and talk about how this all started, and of course how it ends. Be prepared, as this story only gets worse.

In the end, the ICE Officer was cleared of all charges.

But what about the criminal alien? She had an order of deportation and a passport. She was ready to be deported. Of course, she also falsely accused an ICE Officer of sexually assaulting her. Well, the same ICE managers who had our young ICE Officer tracked down in a parking lot like a wanted criminal, publicly shamed, stripped of his gun and badge, and suspended – they released the criminal alien to the street. They let the criminal alien go back into Florida communities where we believe she remains today.

And what about the ICE supervisors involved?

President Trump’s appointee as the Acting Director of ICE, Thomas Homan, just promoted one of the supervisors involved, and it is expected that he will promote the other supervisor shortly. Their immediate supervisor, who was not present in the parking lot but undoubtedly is in part responsible, was set for mandatory retirement next month, but again, President Trump’s appointee as head of ICE extended his retirement for an unprecedented 3 years.

And this is the life of an ICE Officer. This is what ICE Officers deal with every day of the week.

While ICE has a great corps of officers, there is a cancer of completely incompetent, anti-law enforcement leadership and management that is destroying ICE from within. It’s the ICE swamp.

President Trump promised to work directly with ICE Officers to drain ICE’s swamp, but up to this point the swamp within ICE, under the Trump Presidency, is more powerful and more protected than it has ever been before. Up to this point President Trump’s promise has not been kept.